This essay will focus on the way NASA incorporates emotional language when communicating events that are mainly technical and scientific. They are most likely implementing such technique to maximise the reach of their messages, but that might happen at the expense of some technical accuracy.

The main raw data sources for research will be the @MarsCuriosity Twitter account as well as the JPLnews and NASAtelevision Youtube channels, when they can be related to the MSL mission (Mars Science Laboratory / Curiosity).

At a first glance, both Twitter and Youtube channels give us clues about NASA’s media approach. The former is written in first person as if the rover itself was sending the messages, tweeting. The latter includes videos promoting the mission in a cinematic style. The so called “7 minutes of terror” concept (entry, descent and landing on Mars) also seems a clear example to reflect on this essay’s field.

Although there have been similar missions to Mars, MSL is the first one happening after the US Government announced a reduction in NASA’s budget for the next years (Berger and Leone, 2012). A study by Overholt et al. (1975) concludes that public opinion has an effect on space program planning with the Congress and the Office of Management and Budget as the main mediators. In fact, NASA itself states on the magazine IT Talk: “our team has excelled at using social media in a way that benefits the Agency and the taxpayers who fund us” (Schierholz 2011). Also, their software provider ExactTarget argues that “[t]he transparency and immediacy of access to information can and must be an asset for winning and maintaining public support for NASA’s incredibly valuable programs” (Sowa 2011).

The main argument of this essay is that the agency is progressively adapting the way it communicates to optimise their results on social media. This gives NASA the opportunity to partially skip the agenda-setting power of traditional media, to set the public agenda itself.

McCombs & Reynolds (2002) define the agenda-setting role of media as the “ability to influence the salience of topics on the public agenda”. Kosicki (1993) helps in the analysis of this theory by identifying three different areas: public agenda, policy agenda and media agenda. For agenda-setting to happen, therefore, the salient topics of the media agenda should be transferred to the public one.

Cohen’s (1963, p.13) work is frequently quoted in this context, as he concluded that the press “may not be successful much of the time in telling people what to think, but it is stunningly successful in telling its readers what to think  about ” .  However, Bruns (2010) finds that in the network society (Castells 2006), the boundaries between users and producers are increasingly blurred and irrelevant. In this scenario there are not users and producers any more, but “produsers”. Consequently, traditional media have lost their gatekeeping role. This is one of the reasons why Berger & Freeman (2011) consider that the conditions for an agenda-setting theory to be functional do not exist in new media. Other authors (Gane & Beer 2008, Antony & Thomas 2010) agree on the fact that participatory publishing tools allow citizens to set the agenda themselves.

At this point, it is important to quote the formal developer of the agenda-setting theory:

whether the basic agenda setting effects of newsmedia continue in much the same fashion as the previous decades or eventually disappear because of the changing media landscape […] will remain high on the research agenda for at least the near term (McCombs 2005, p. 546).

Meraz (2009) makes a very interesting point about how each type of media influences the public opinion nowadays. She concludes that although traditional media are still “more likely to exert their agenda setting power at the ‘short head’ of the long tail of media choices”, “citizen media influence aggregates agenda setting power down the ‘long tail’ of media options”. According to Anderson’s (2004) “long tail theory”, the short head represents the homogeneous mass market, while the long tail includes a multiplicity of very stratified groups that —through an aggregate effect— could outnumber the short head. This explains why —as Antony & Thomas (2010, p.1283) noted— “interest groups and agencies of government business, education and religion tend to rely on secondary communications (such as non-mainstream and/or alternative news media vehicles) for information”. Overholt et al. (1975, p. 13) confirm that for NASA, “the support of particular key groups is essential for programs to go ahead”.

Finally, Chowdhury et al. (2011) help to analyse the salience of topics on online media. As they put it, “consumers generally connect with a small handful of businesses rather than a large number of businesses, which indicates the special preference consumers have for the businesses they connect to”. They also argue that the amount of followers of an account is a “statistically significant direct predictor for the amount of word of mouth messages from consumers without connection to the business”.

335 original tweets from the @MarsCuriosity account were analysed between July 1 and September 10. Tweets were coded in three groups: answers or messages to other users, informative tweets, and informative tweets that —following Colley et al. (2004)— included the “less formal stylistic conventions” of emotional electronic communication. The elements considered for the last group were:

The collected data shows that 195 (58,21%) of the tweets were directly aimed at other users in the context of a conversation, 60 (17,91%) displayed information or links to content in a more or less dry way, and 160 (47,76%) shared information along with the above mentioned stylistic conventions. The informational tweets received 61,247 retweets from other users, and the more emotional ones, 297,701. This means an average of 1,021 retweets for each informative tweet and 2,756 for each emotional one. However, if we had not taken into account the four most retweeted messages —which were sent right after the “7 minutes of terror” and displayed emotional features— the last group would have an average of 1,515 retweets per tweet. In the whole period, the average of general (not aimed at a particular user) tweets per day is 2.2. Considering that most activity was carried out during daytime in the USA, that represents approximately a tweet every 5 hours and a half, which is a lower pace than what Chowdhury et al. (2011) recommend for engaging broad audiences. Nonetheless, the frequency of tweets is not stable over the time period: the account tweeted 37 times between the 5th and the 7th of August, raising the frequency to 12.3 tweets per day. According to Twittercount.com, 511,667 new users followed the account on the 6th of August (landing event), which entails a 166% increase in the total amount of followers, in just 24 hours.

These data suggest that NASA used emotional features to engage the audience in most of Curiosity’s tweets. They chose this strategy and a high tweeting frequency for the apparently crucial moment of the mission: the landing on Mars. Overall, their dryer tweets received less attention. However, most of their messages started or continued conversations with other Twitter users.

Two more of NASA’s missions have similar accounts since 2008. @MarsRovers (Spirit and Opportunity) and @MarsPhoenix have engaged 170,000 and 220,000 followers respectively. Without taking into account other factors like the actual relevance of each mission, the attention towards this kind of account is clearly increasing.

< On the Youtube side, the aim of this essay was to detect elements that would be expected in narrative films but not in scientific communication. Those include: overwhelming presence of music, fast paced editing, fake hand-held camera movements, unrealistic sound effects and exaggeration. All these elements were found.

< The video “Mars Science Laboratory Curiosity Rover Animation” includes sound effects in open space and on Mars. They can be heard by the virtual camera from hundreds of meters away. Since sound does not travel in vacuum (Heckert 2011) and on the red planet’s thin atmosphere it would fade out after a few hundred feet (Hanford 2006), these can be considered scientific incoherences in favour of audience attention. As we see in Van Egmond (2008), sound of products is a crucial factor in the perception consumers have about them.

The video “ Challenges of Getting to Mars: Curiosity’s Seven Minutes of Terror ” advertises the apparently decisive moment of the mission. 7 minutes is the time the spacecraft needs to go from the top of the atmosphere to the surface of Mars. However, information sent back to Earth only arrives 14 minutes later, and the human interaction with the rover was planned to end 2 hours before the landing (Sample 2012). The minutes of terror, therefore, could have been 7, 21 or 120. Space exploration is an incredibly slow process, as we can see from the pace at which high definition footage gets downloaded from the rover. The choice for immediacy, then, seems crafted for ensuring attention through new media. The “minutes of terror” concept can be traced back to —at least— 2003’s Mars Exploration Rover mission (the minutes were 6, back then) and 2008’s Phoenix . The equivalent videos have been watched 20,000 and 60,000 times, respectively. The 2 million views of 2012’s version tell us how much more effective this strategy is now.

It has to be said, though, that real image videos, especially the ones with footage from the red planet, tend not to include the aforementioned elements. Several videos are informative reports or unedited clips of the crucial moments. No relation was found between the use of the mentioned emotional and the number of views.

A common phenomenon of online media that NASA might be profiting from is “remediation and bricolage” (Deuze 2005). The image files that the mission receives from Mars are being shared online without the constraints of copyright (Babineaux 2008). This allows users to download them and build upon them. The video of Curiosity’s descent and landing exemplifies the phenomenon: When NASA released the HD video as recorded by the rover and synchronised it with their radio communications, other Youtube users enhanced it by correcting the colour, stabilising the motion, interpolating frames and adding sound effects and/or music. As of now, NASA’s version has received 278,000 views while two of the user generated ones have been watched more than 3.1 and 4.7 million times.

Still images tell us more about how much “remediation and bricolage” spread NASA’s content through new media. Estonian designer Andréi Bodrov released a 360º panorama of Curiosity’s landing site before NASA had images of the whole area. By airbrushing and inventing some of the landscape, he amazed some and incensed other (‘Editorial’ 2012).

We can also compare NASA’s current behaviour towards social media with an old case. According to Jones (2005), in 1969 the agency modified a picture from the moon landing to make it more suitable for the press:

When the image was prepared for release for publication soon after the mission, it was cropped at the bottom and sides, and a black area was added at the top to give the released version visual balance 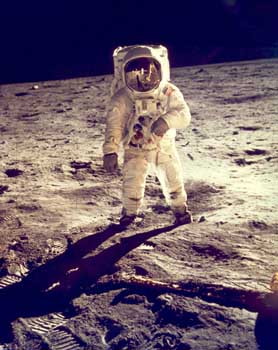 Marín (2012) claims that —in order to prevent conspiracy theories— NASA does not airbrush images any more. This shows not only how relevant user “bricolage” is, but also that NASA adapted some of their content for traditional media in the past, just like now is adapting it for online media.

In fact, on NASA’s IT Talk magazine McClellan (2011) explains that the internal regulations have been easy to modify for new media: “Most of the existing policies worked with minor exceptions. For example, updates to NASA Policy Directive 2540.1 included replacing the word ‘teletypes’ with ‘Facebook’”.

NASA is successfully adapting its messages to new media by including features that add emotion to electronic communication. In some cases, this happens at the expense of technical accuracy, but there is a clear line between promotional messages and scientific data from the missions. The new scenario is allowing the agency to partially skip the agenda-setting power of traditional media and set directly some topics into the public agenda. Social media are an optimal tool for the communication of a government agency like NASA, as they facilitate the reach of certain highly stratified interest groups, whose opinion has an essential influence in space program budget and planning.

McCombs, M; Reynolds, A 2002, ‘News influence on our pictures of the world’ Media effects: Advances in theory and research.